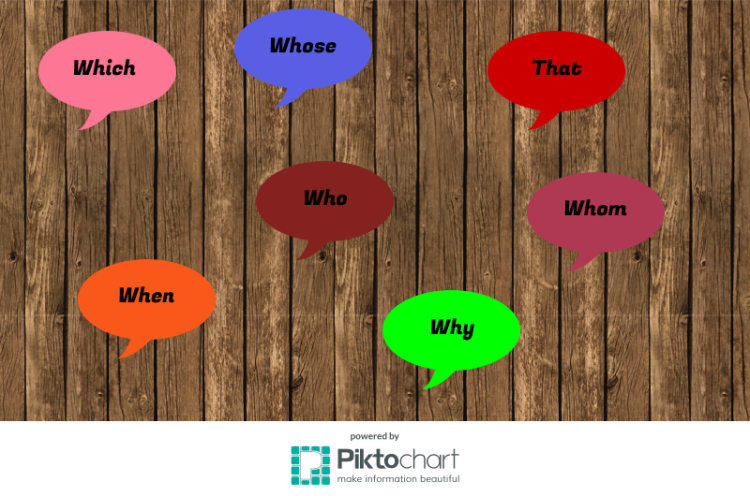 Relative clauses are essential for every student, no matter the level they are studying for. So whether you’re teaching them the basics or the finer points, have a look at my guide to make sure you know the answer to every question you’re asked!

Which / That* for things

Who / Whom for people (see below for difference)

Why for reason or justification

We use relative pronouns to replace regular pronouns and join two sentences together. So instead of saying these two separately;

I have an ice cream. It is delicious.

I have an ice cream which is delicious.

In this example, the relative pronoun ‘Which’ replaces the now redundant pronoun ‘It’

Sometimes, a relative clause will give me essential information that I need to understand the sentence. This is called a Defining Clause.

They have these characteristics,

The chair which Andrew is sitting in

The place where we first met

The girl whose dog you found

Other times, a relative clause will give me extra information that I don’t need in order to understand the sentence. They have the following characteristics;

The chair, which is red, is broken

Rose, whose cat is very fat, likes 5 cups of tea a day

Difference between ‘Who’ and ‘Whom’

Many people believe that ‘Whom’ is simply ore formal than ‘Who. While perhaps being inadvertently true, there is actually another explanation.

If the person in the relative clause is expressed with a subject pronoun (she, he, it, they) then you use ‘Who’

Whereas if the person is the object of the sentence (her, him, it, them) ‘Whom’ must instead be used.

When can you omit the pronoun altogether?

The pronoun isn’t necessary if it is the object of the sentence in a defining clause. Have a look at some examples.

The chair, which is red, is broken. Here, the pronoun must be used because the sentence is non defining

I have a friend who is great. Here, it must be used becase although the sentence is defining, the pronoun is the subject and not the object of the verb.

In these two sentences, the pronoun can be left out because it is both the object of the verb and in a defining clause.

Any more questions about relative clauses? Leave me a comment and let me know!

2 thoughts on “How To Teach Relative Clauses”